by hardpad
Hi there,
I tried using Wolf4sdl and have the full versions of Wolf3D, SOD and the 2 mission packs set up in their own folders within Wolf3D - looked and worked OK but for the fact that the mouse support was too slow for me - kept getting slaughtered too often..! Then discovered EC Wolf which works much better for me. Only problem is that currently can only play Wolf3D as EC Wolf does not see SOD or the 2 mission packs. I don't seem to have an ECwolf.cfg file either - do I need to create one. Also how do I access the console to enter commands etc. [Please note have been using source ports for Heretic, Hexen, Doom 1+2, Quake etc for years but have never encountered the problems I am currently facing]. Using the shift key does not do anything. What am I missing..??!! Played Wolf3D and SOD over 20 years ago and would VERY much like to play them again. Would also like to try out the updated model and texture packs for these games - Wolf2D and SOD - where does one get these from please..?? Also is there a way of seeing stats for number of kills, secrets left to find etc whilst playing the games as seen in various Youtube videos.

Many thanks for any help anyone may provide..!!

by Blzut3
Your config file would be in %AppData% unless you use command line switches to change it.

Check the hashes of your Spear of Destiny files against the ones in the wiki. I can't imagine why you'd have corrupted data files, but while unlikely it could be a reason for ECWolf to not detect them. Otherwise tell me more about how you have your files laid out.

Check out the releases sub forum here for mods. There are a few graphical enhancement mods there.

For the stats go into the automap options menu and turn them on. You'll need to bind the automap to a key in the control options if you haven't already.

ECWolf does not currently save a console.

by hardpad
Hi there again - posted a reply yesterday but it has not shown up as yet..!! Just to clarify I am running Windows 10 and have the game set up in C://games/wolf3d - EC Wolf is installed into this folder along with the WL6 files. In addition I have 3 subfolders within Wolf3D as SOD1, SOD2 and SOD3 - these being original SOD plus the 2 mission packs. Have now installed EC Wolf on 4 separate occasions into 3 separate folders - can run Wolf 3D with EC Wolf along with the HQ pack [55 mb] - this works fine. Last night I checked automap stats section - does not appear..!! So I tried an experiment [which I have been thinking about for a few days now] of installing EC Wolf into the SOD1 folder [original Spear in other words]. This time something different occurred which had not occurred before:
[a] an ECwolf.cfg file was created [in the wolf3d folder] along with the IWAD picker command - if I clicked on the config file it gave me an option to select Wolf 3D or SOD - even though wolf3d files are in a different folder - don't understand this.
it also gave me the stats ratio button which was not created before. Why..??!!
So I then copied the EC WOLF.cfg file to my Wolf 3D folder where I then assumed that I would then have the option of playing Wolf3D or SOD - doesn't work. Again I don't understand this - doesn't make any sense to me..??!!
So a way round the problem of loading each and every game - WOLF3D, SOD + both mission packs, is to install EC WOLF into ALL the folders and add the HQ pack to each. Waste of space I admit [but I have tons of space anyway] until I can find another way of loading each game version.
I trust this makes sense - if not just email me please. And once again many thanks for taking the time and trouble to reply in the first place.

by Blzut3
ECWolf will not create a config file in C:\games\wolf3d unless you're running a batch file or you otherwise specify a command line option to move the config file. By default ECWolf will always use the config in "%AppData%\ecwolf".

ECWolf will only locate game data if: Since it sounds like the first option doesn't apply to you, what I would recommend is re-downloading ECWolf from my website. Extract that into a new directory. Then find the wl6, sod, sd2, and sd3 files listed in the wiki article I mentioned in my last post. (Right now the sd2/sd3 files will currently be named sod in your existing install). You should be able to put all of these in the directory you just created.

Once done ECWolf should present you the selection dialog.

For the level ratios, this is the option I'm referring to: 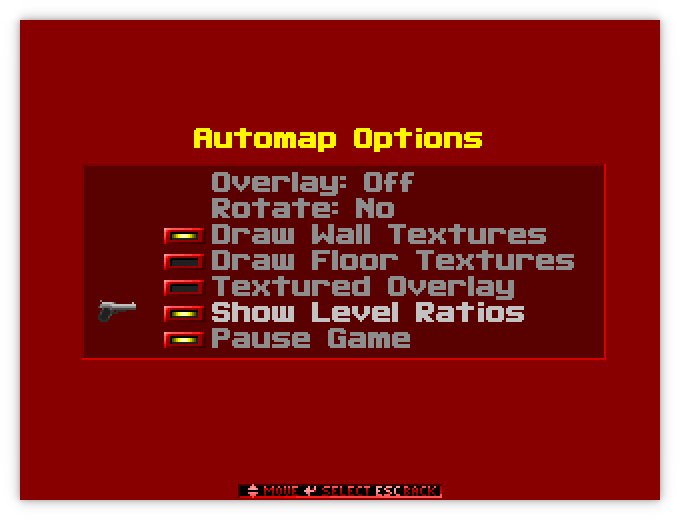 If this is checked then you'll have the ratios visible on the automap. If not, something is really weird.

by hardpad
Hi there again and thanks for further help - apologies for getting the slashes round the wrong way with directory set-up..!!

I initially used the set-up I had for wolf4sdl with Wolf3D, SOD and two mission packs setup in individual folders within Wolf3D and then launched the games via the launcher - then I simply installed EC Wolf into this same directory - Wolf3D in other words. I assumed that this would work but it doesn't so I copied the WL6 files to the same dir. as EC Wolf - that then worked up to a point [but not for SOD + mission packs]. I now have the ratios button working - but have no idea why It only just appeared - it certainly was not showing before..!!

Pres. if I used your suggestion and renamed the 2 SOD mission packs as sod2 and sod3 files and moved them all into the main folder it should then work - will try it later on tonight.

Would it be possible to email me a version of ecwolf.cfg file so's I could edit to suit - all that is showing in mine is the loadiwadpicker command. And nothing else..!!

Again thanks for replying..!!

by Blzut3
Do make sure that you are actually looking at the right configuration file. If you're able to get in game then the config file will be populated with the defaults. To reiterate, under normal circumstances ECWolf reads the config file in %AppData%. 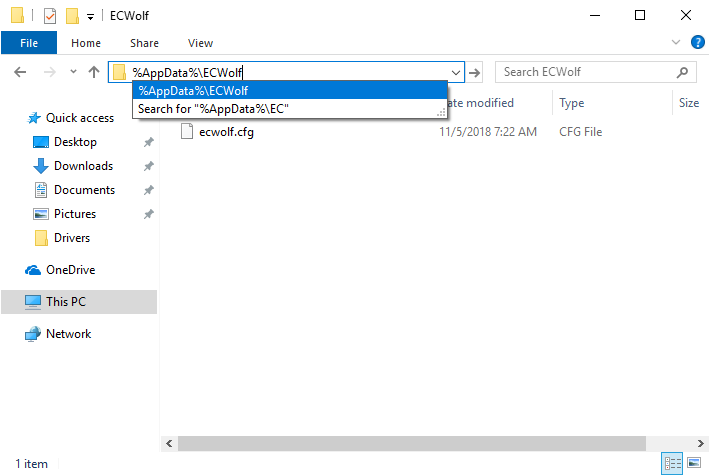