by Gez
No, it is not possible with 3D floors. Sound environments affect the whole sector. You need to put the different stories in different sectors, which means you have to use portals instead.

by Enjay
Yup, now that portals are a thing, they would be the way to go for this. I have done it the 3D floor way in the past in my Burghead mod. If you have played it, there is a map where you can walk above ground and the reverb sounds normal but if you walk through a tunnel, things get a bit echoey.

The way I did it was to activate the appropriate reverb things when you enter/leave the tunnel. It works but if you were to magically be able to float through the tunnel roof into the open area above, things would still be echoey. Such a setup is really only suited to single player.

by Zhadoom
Thank you, gentlemen!

Enjay, your solution will work with the building in my map.

Gez, I still havn't figured out how portals work. Have to do some studies ...

This map serves as a basic demonstration of the portal system in GZDoom.

Credit goes to Arookas (iirc), on the ZDoom forums. I couldn't find the original link to it.

It has two line portals and one sector portal, the overhead "inside the bridge" area is the entire section that is "portaled".

Oh, thank you very much!

That helps me a lot.
Seems I owe you one ... or at least a screenshot of my far-from-being-finished mapset...

by Enjay
Neat demo. Any reason I see this briefly when the hole in the floor comes into view? 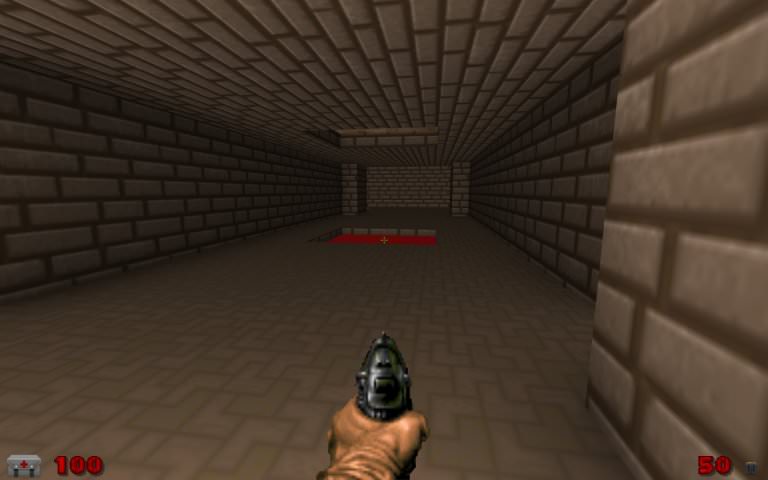 @Zhadoom, you may well have seen this already but it's also a nice simple portal demo (I didn't make it).

There's two portals there. There's something going wonky with the clipping when that happens.

Normally you don't see this kind of problem in GZDoom, but this portal setup despite being so hugely simple is much more complex than it was designed for - those red bricks are actually the behind-space in order to allow the player through the line.

I think in a real portal setup, if you replaced the red bricks with a null texture "-" it will look a little better.
All times are UTC+01:00
Page 1 of 1
Powered by phpBB® Forum Software © phpBB Limited
https://www.phpbb.com/