In this forum, you can start an ongoing development diary detailing the progress on your latest mods in progress.

I dunno, I posted my Wad in Wip, and all I got was one comment, which in turn, directed me to come here (Thanks

So Uh, If someone cant get onto Wip, Ill do the old Copy and Paste to the text.

Um...wrong forum. This should be in projects since this is just for weapons mods.
Top

Mine is a Weapons Mod
Top

Oh. I assumed it wasn't since it's on WIP and it isn't behaving for me right now
Top

(As taken from my WIP description that 4 people read *Sarcasm*)

Basically a Weapons Mod, that started out as a small Wad meant to enhance Toke's coopbuildm Map 19. Then I decided to try my hand in DECORATE coding, and never looked back. Trail of Corpses originally had an actual story and 1st map, but I deleted it as I couldn't do what I wanted in ACS (I suck with ACS), but I hope to have a small map made to "Show Off" the new monsters and weapons. As of right now the Wad has 33 fully-coded weapons, in addition to the original Doom weapons, the only thing left is to clean up and fix some code, finish pickup graphics, work on the ammo, and do a couple of sounds, and then all 33 are done. It also has 28 new Fully-Coded enemies (Well 27 if you minus the recoded Heresy Lord, from the ZDoom Monster Resource Wad), all thats left is a few code fixes, and sounds . . . sounds for virtually all of them.

Monsters:
Cannon Turret - Stationary Turret
Friendly Toxic Bomber - Midget suicide Gas Bomber
Panzer Demon - Like a Cannon TUrret, but in a Demon Tank form
Bad Toxic Bomber - Like the Friendly version, except red and mean
Aludac - Summons several Monsters, and uses several powerful attacks
Aludac 2 (All Business) - More variety of attacks, and more attacks period, but at the cost of summonings
Rogor - Flying Missle platform with a habit of summoning other airborn monsters
CyberDemon 2 - Cyberdemon with D64 Graphics and some new sounds
Decay Zombie - Grey Zombie that keeps getting up untill XDeathed, and shoots Gas
Blood Zombie - Same as Above, but Red, and shoots ripping bullets
War Zombie - Same as last 2, but stronger, and they use a combination Machine Rifle and Missle Launcher
Nuke Zombie - Same as the other zombies, but faster, and with a much more powerful attack/attacks
BlackShip (More of a special level Enemy, I decided not to make the level) - black sillouhette (Cant spell it) or a bombardment ship, that . . . bombards things
Panzer Demon Mk2 - Same as Normal Panzer Demon, but uses a much more potent weapon
Jumping Shotgunner - Hops at enemies to try to blast them up close
Alpha Soul - Alpha Soul from the Alpha release (My DECORATE Version anyway), smae basic attack, ets etc
Alpha Soul Crazy - . . . Crazy
Scourge (Use at own Risk, will freeze Comp, but its cool enough to keep) - Zombie, when he dies, instead of standing up, theres a chance they'll spawn 2 more Scourges
Zeg-Vok - The Champ, uses Player Weapons, enhanced player weapons, Meteors, Heals himself, chance of a volitile death, and summons a mean guest when/if killed, and he taunts you ala C&C Commando Sounds
Zeg-Vok's Ghost - Mean guest after Zeg-Vok is "Killed", fire based attacks of pain
UAC Tank - Shoots 4 small rapid fire cannons 2 at a time
UAC Walker - Lighter than the Tank, and uses a Large Gatling Gun
Fire Drake - Deadly Fire Breath, and can heave some pissed off lava your way
Uber Manc - Giant Mancubus, with 3 different attacks
Giant HellKnight - Giant Hell Knight, the Melee doesnt work right due to its radius
Giant Baron - Same a Giant HellKnight, but of the Baron Flavor
Giant Lost Soul - GIant Lost soul . . . nuff' said

Weapons:
Golden Axe - The Legendary Golden Axe
Death Adder's Armlet - The Armlet of Death Adder, play Golden Axe to see what he can do
Thunder Gaunlets - shoots a wave of "Shootable" wind barriers, no longer blocks projectiles like it should due to the newer ZDoom Versions
Cheese Grater - A nasty little Cheese Grater
Big Mace (Might not make the cut) - The Mace used by the Minotaurs from Golden Axe 2
Dual Thompsons - Self Explanatory
EMG - Single EMG, think PeeWee weapon from Total Annihilation
Burninate (Sound Work Needed) - TROGDOR!
Cerebellum - Shoots Metallic orbs that burst into smaller explosive orbs
Punch Gun - Glove with a gun mounted on the tiop of the hand
Shotgun Rod - Essentially a quadruple Shotgun, that fires fast too
Assult Rifle - Average Machine Gun + Shotgun
Heavy Chaingun (Maybe change the name to Phalanx) - Bullet Churning Death
Ultimatum - Really Powerful Shotgun + Ripping Slug of death + Gas bullets in fired in a wide angle
Prototype Railgun - Generic Raingun with 2 modes of fire
Doom 64 SSG (Probably going to get removed)
Chicken Run (Less of a weapon, more of a getaway tool) - Enables you to "Fly" up into the air, and then quickly drop down at your discretion
Field Rifle - Alpha Dooms Bayonet Rifle, Highly accurate Machine Rifle + real Stabbing action (General idea stolen from an Immoral conduct mod)
Spoon - A rusty Grimy Spoon for poking people to death
Aries V - Anti-Armor Homing Missles and an Anti-Personell Cannon rolled into one
Explosive Mine (If I can fix) - A mine placed on the ground, that will blow up when anything touches it
Lance - Think Jousting . . . but bloodier
Maulator - Incindary Cannon, fires either 1 explosive burst, or a chain of several Highly explosive homing bolts
Nuke of Doom - Small Nuclear bomb
SSG Lance - Like the Lance, but instead using a Double Barreled Shotgun
Gas Mine - Mine the when deployed, releases deadly gasses all around it
Stealth Mine (If I can fix) - Like the regular explosive mine, but transparent and stuff
Unmaker - Not your ordinary Unmaker, think Force of Nature from NoX
M.A.D. Shotgun - Like the Shotgun Rod, but takes 15 health every time its fired, and increases your speed
Flak Cannon - Fires Highly Explosive Anti Air shells that explode at random distances
StarBurster Beta (Propbable Name Change) - Special Incindiary Cannon
Toxin Rifle - Shoots Toxin Bullets similar to the Ultimatum's, but they dont last as long
Drunk Plasma Rifle - Fires odd-moving Plasma bolts with crazy trails
Tanker Cannons - Dual Mortar Cannons Ala T2 War2003


As of right now, Im not sure if I will fully complete it, due to work and school and all, but if enough people show an interest in it, Ill give it a hell of a try, or something along those lines. Oh, and while it was originally made for ZDoom, Im now using GZDoom due to the fact that it looks better, and that it isnt constrained to the Global Color Palette (Although I haven't found a way to impliment the 8-Bit PNGs)

Comments would be appreciated . . . purty please 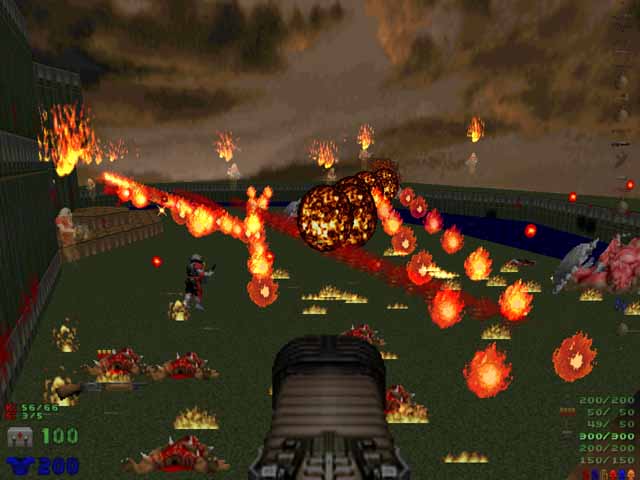 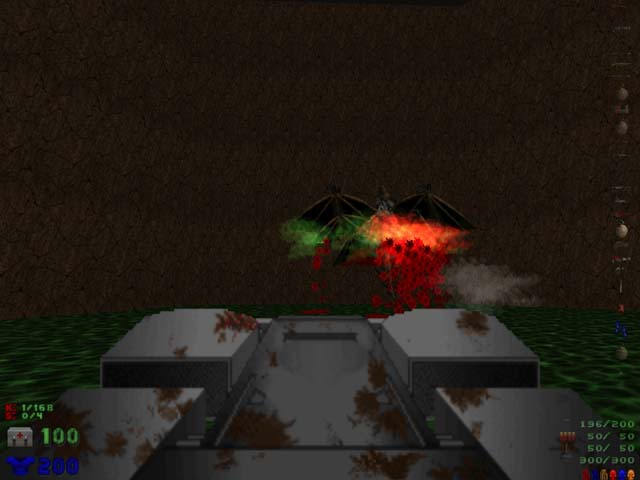 Looks purrty. You better hope this isn't canned, because this looks damn swell. Even if it does end up being canned, release it here anyways, please.

The Stealth Crossbow (Blatant Sprite Rip, but an Unblatant idea behind it's Altfire)
TeleFragger (Originally wanted it to spawn 3 monsters with +telestomp inside other monsters ala the BFG Spray, but due to unforseen problems . . . It doesnt work as smoothly as I would have it)

Also, That A_Countdown is Horrible . . . Are there any ways to get it to work by subtracting 1 every time its called . . . and not just kill the projectile once its called?
Top

I figured I should show a pic of the primary fire of the Starburster, considering the fact that I put a decent amount of R&D (n00b style) into it, and it tends to clear a small room of light to med enemies fairly quickly.
I took the FloorFire graphics from Nanami's Afrit monster, I figured that its in the monster resource wad, so I wouldnt get in trouble for using it, but credit shall still be rendered!

And to ask anyone who reads this to post what they would expect to see from a small demonic nuke. As of right now, I have the residual ground based flames, lots of A_Mushrooms, High Powered Explosions, and a mushroom cloud. I also want to try to incorporate the ACS Function Radius_Quake into it, and I intend on adding alot of A_PainDie("CustomObject" Lots) into the mix. 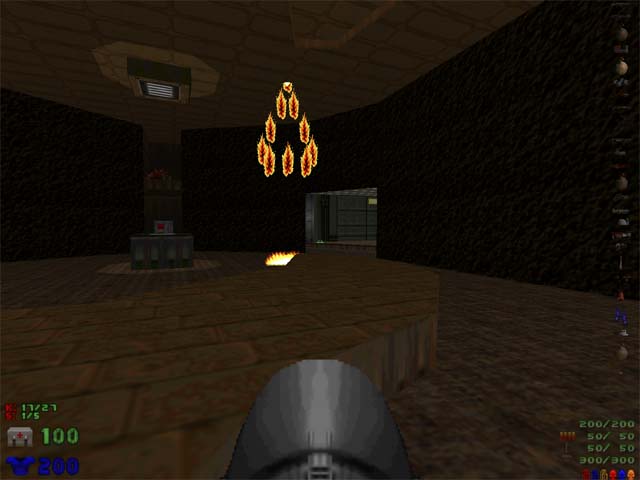 Is it possible to do screen fades through Decorate? Perhaps flashing the screen white for a moment would be a neat effect.
Top

Flashing the screen white can be done with A_LightInverse. A_SetBlend also would do but I can't remember the parameters off the top of my head.
Top

LightInverse is the Invincibility Sphere effect I think. And Im already using that for my Stealth Crossbow. Although It could still be Extremely effective with a Nuke Bomb

This is basically what I have so far, THe mushroom cloud and Residual fire, along with an ExplosionRadius of 700 and ExplosionDamage of 3500 with lots of projectiles that have an Explosion Radius of 2000 and their Explosion Damage is 650, with them all exploding a lot. I have a bomb that summons 4 explosive nukebombs and and Big supernukebomb explosion in the center, but that caused MASSIVE slowdowns. 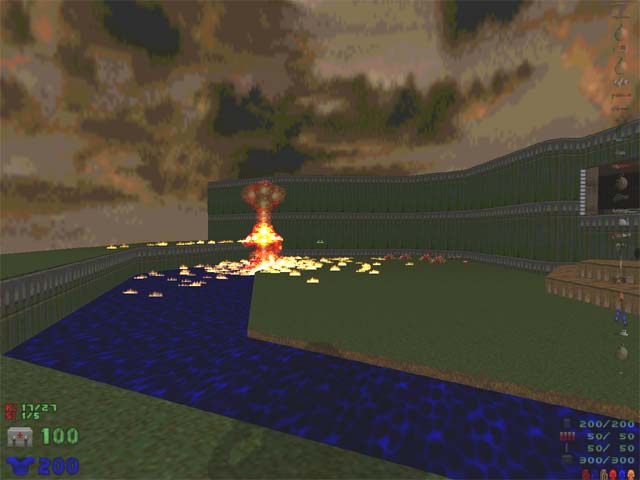 I cannot wait to play this.
Top

Although, first chance I get, Im going to add flying souls that fly from the explosion and then dissapear in the air a little ways from the nuke, seeing how as its a demonic nuke. And im thinking about adding the lava sprites from the Fire Wyrm wad that Neoworm posted up on his site.
Top

These flying things on first and third screen are my Cyberspectres, arenÂ´t they?
Top
Locked
106 posts