Just looking for a bit of background information to help me understand what's going on here because I'm not really up on the OpenGL terminology.

I've noticed with recent GZDoom builds the return of something that I haven't seen for a while: what I would call "sparklies"; those little white dots that appear and disappear in the scene as you move around. Now, don't get me wrong, they are not bad and nothing like the ones I have seen in various games in the past, but they are there. What's more, I don't know if it's anything to do with the newer GZDoom builds or just my new computer.

In the past, changing the rendering quality option would fix them but this doesn't seem to make any difference to what I'm seeing. What does make a difference, however, are the Multisampling and FXAA settings. Both of these can cure the sparklies.

Multisampling has the more gradual effect. Turning it to 2X reduces them noticeably - they seem to get duller rather than fewer. I have to turn it up a bit higher than that to get them completely gone. certainly by the time it's up to 32x I don't see them any more.

FXAA has a more immediate dramatic effect. Even on the first Low setting the sparklies are basically gone with only an occasional one visible.

I guess my questions are really about what, if any, cost (e.g. speed hit) these two systems have, which one is better, do they co-exist happily (i.e. can/should both be enabled) and are there any other settings that might have an effect on these sparklies? Other than the effect on the sparklies, I don't really see much impact on the way things look with either Multisampling of FXAA. Should I?

Also, any idea why Render Quality no longer seems to make a difference to the sparklies?
Top

Render Quality should fix them normally. There have been a few reports about white dots apparing randomly, but nobody was able to do a screenshot of them so far.
This one doesn't even look like it is on a linedef boundary, but with that image it's hard to tell. Do you have a larger picture? And how frequent are they for you?
Top

I am able to make them reliably appear when I do r_clearbuffer 2. I normally play at 1600x900 resolution. When I have multisample set to 1, they will appear regardless of whether I have rendering set to quality or speed. Speaking of which, is that variable still being checked? 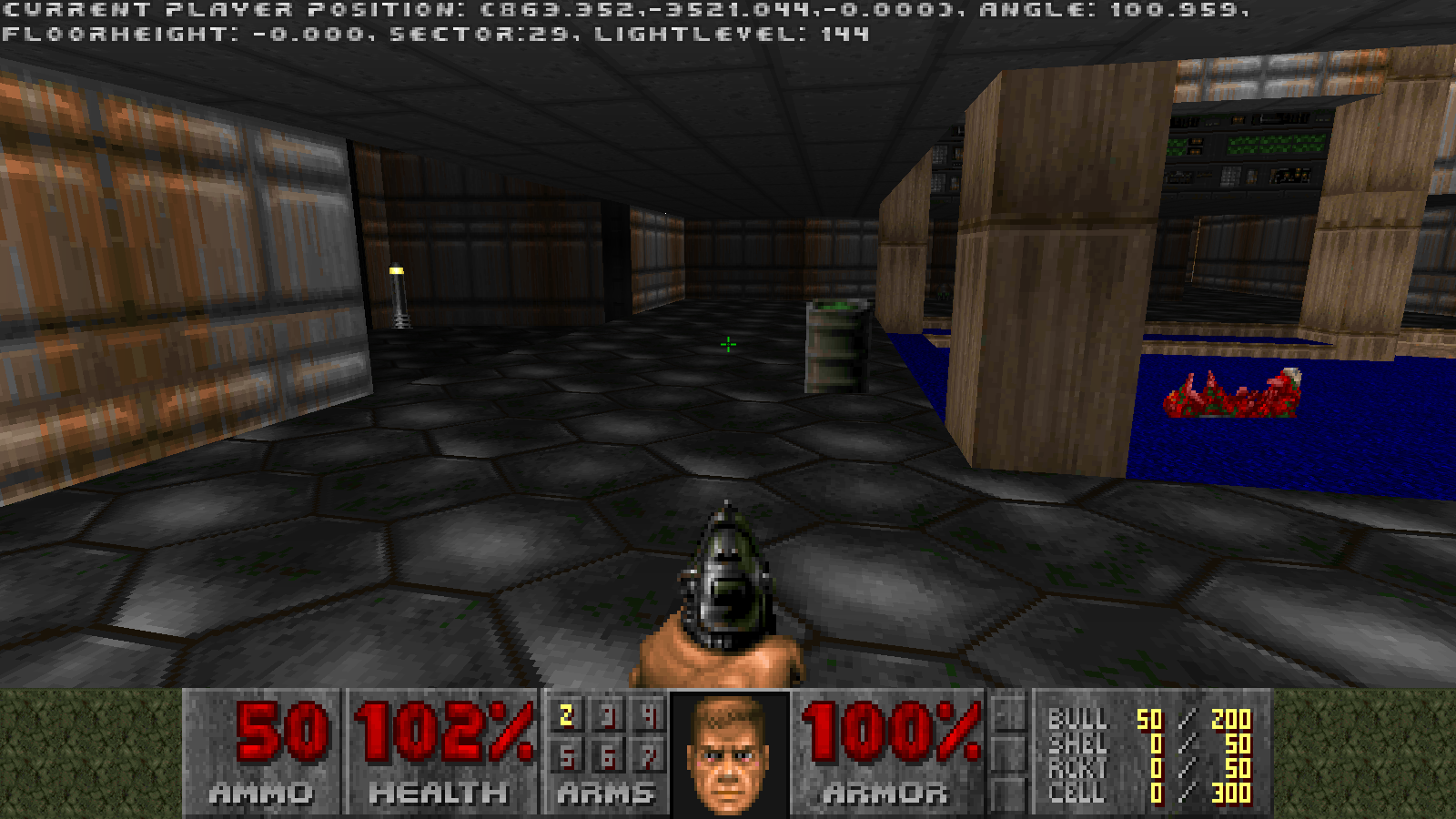 It should be. If it isn't it's certainly not intentional.
Top

It's quite hard to get a decent screenshot because in game they are more common than can be grabbed in a single picture. They come and go as the mouse moves so as you sweep your view around, you see quite a few of them but if you take a static picture there will be very few of them present at that one instant when the screenshot was taken.

I think that you are correct, that one is not on a linedef boundary. I did wonder about that because I thought that's where they usually appeared. How frequent? I guess if I looked around in most maps, sooner or later I'd find somewhere that I could see them. I was able to find them quite reliably in my Burghead mod. Here's a bigger picture. I can just see three of them in this shot (the top one is fainter) to the left of the crosshair and, interestingly, in a vertical line. As you can see, they're pretty small (just one pixel each). I remember "old sparklies" being bigger but that could just be because I was running in a lower resolution back then.

If you want to try and replicate it if you still have the mod (and if it still runs on the newer GZDooms - I don't have the older, uploaded version and I know it's messy control-lump-wise):

start the mod
type map map113
turn around and use the door behind you (that will take you to map112)
go up the stairs and open the door at the top to see an outdoor area (not sure if necessary)
turn around and look at the wall while moving around (it's the area from the screenshot).
Top

Problem solved. There was a small but nasty bug that rendered quality setting useless. I have no idea when this happened but the flag check for no splitting got accidentally inverted.
Top

Indeed, thanks very much. A quick compile of your commit and my sparklies go when I switch on "Quality".


I'd still be interested to find out if anyone has any advice about the use of Multisampling and/or FXAA re what advantages they might offer etc. because I'm not entirely sure what they are meant to offer over and above the normal GZDoom rendering options.
Top

They are different methods to smooth out jagged edges. Best look outside the windows in E1M1, slightly upward and then increase the multisampling setting. FXAA is just a different method that tries to do it as a postprocessing effect, not a hardware feature. If you got a decent graphics card, 4x multisampling would be recommended. Anything more is overkill.
Top

Ah, thanks. That is a good place to see the effect. I can see what it's doing now. Much appreciated.
Top
Locked
10 posts • Page 1 of 1