Enjay wrote:Some of these special effects are looking very nice. I look forward to seeing them in action.

Exactly, I love your shots Keksdose, this is really atmospheric!
Top

Thx, but grab your own nose

Think you could possibly whip up Heretic and Hexen versions, KeksDose?

Of what? (Choose from these three things: Resource, Effects, "1337 Monsters"). If you choose effects/resource, it's already in development (Heretic version). But this is going to be a pain in the @$$, because I need the original code of every Actor in Heretic/Hexen.
Top

OMGFire version 3 is almost complete (for those who have subscribed to previous versions). Does anybody have a (somewhat) decent flame thrower weapon I could test this out with?

I think Demon Eclipse always had a nice one (if I recall correctly).
Also, I think many weapon mods have some decent ones (wasn't there this flame thrower patch for the good ol' Doom?).

And that effect looks really hellish. I don't want to get toasted in there

@Torr
My method is out-dated. I kinda change style again so I might tell something later P:
Top

Isn't it FBase3 or 4 from Boris? *G* Beyond, Keks, you are indeed a maniac, but these explosions simply rock!
Top

That sounds about right. 4 I think.

Enjay's screenie proves that a good model with good textures CAN indeed not look toy-ish and crappy in GZDoom!
Top

@Enjay: Did you rip that model from Unreal tourament?
Top

Yup, but its a little bit of a cheat. I couldn't figure out how to rip the normal player models so that's just the one you see on the player selection screen. So, it's just a single frame because I couldn't be bothered animating it. I just thought it looked quite cool.

As a side issue, the model normally uses 4 different graphics that get mapped onto it: chest, legs, face and hands IIRC. However, with GZdoom only supporting single images per model, you have to combine them all on to one graphic and remap everything. It's quite a pain. It'd be much easier if GZdoom supported multiple graphics for a single model. Half the models I've been looking at recently use that system.

Oh, and I also made the mistake of saving the model in the screenshot as an MD2 rather than an MD3 so he's not quite as sharp as he could have been.
Top

I've laways been a fan of Halflife (although I hate CS

Just a reminder: Screenshot posts that break the page layout will be deleted without any warning (just in case some person misses their screenshots!)
Top

Nash wrote:Enjay's screenie proves that a good model with good textures CAN indeed not look toy-ish and crappy in GZDoom! 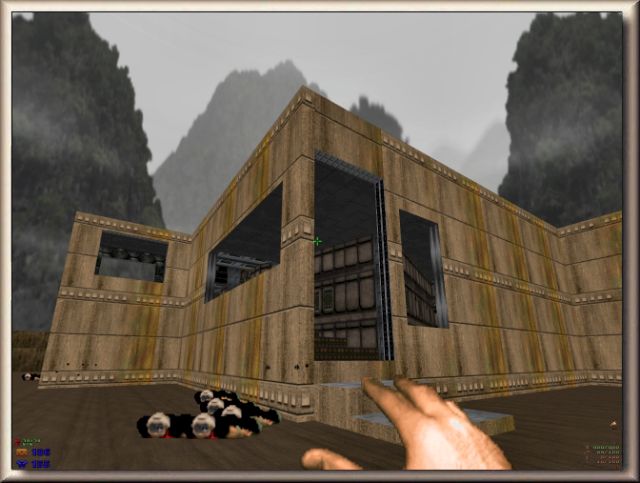